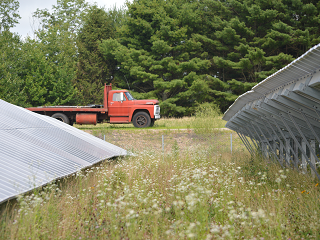 NORTH SMITHFIELD – The Town Council on Monday approved a tax agreement with solar company Green Development, reaching tentative terms that will amount to close to $5.4 million in payments over the next 20 years.

Though the agreement is still subject to final approval, the terms reached Monday include payments of $7,000 per year per megawatt on a 38.4 megawatt project for 10 years, with the option to renew the agreement for another 10 years. The amount was less than originally anticipated due to a reduction in the project size, but greater than the $5,000 per megawatt required by state law.

At issue in previous meetings was a clause that would prevent the town from increasing the tax value of the property the solar panels stand on. On Monday, the developer and town officials compromised on the issue, agreeing to remove the clause in exchange for language that would reduce the company’s payment to the town if the town decides to increase the property value.

Councilors approved the tax agreement by a 4-1 vote, with Councilor Douglas Osier Jr. voting against.

A more controversial part of Monday’s discussion was the development agreement, a document that covers both a one-time payment withthe town and surety for decommissioning costs. The one-time payment drew reactions from residents at the last meeting when it was learned that John Beauregard, a former Town Council president who no longer serves on the Town Council, had been negotiating with Green Development Chairman Mark DePasquale behind the scenes to secure promised construction a concession stand and bathroom facility for the high school athletic complex, at an estimated $275,000 value,in lieu of a promised $192,000 payment.

Despite concerns from some residents that a non-town official was negotiating terms, councilors were generally supportive of the arrangement, pointing out the town has struggled to come up with funding for the proposed bathroom facility.

“This is a one-time thing. Do you know how many fundraisers we’d have to have to do that?” said Councilor Claire O’Hara.

Councilors ultimately agreed to ask for a completed concession stand and bathroom facility or $287,500 cash for the one-time payment at their discretion.

There was less agreement between councilors on decommissioning surety, an arrangement designed to protect the town from the cost of dismantling the project if the company should fail away or walk away. Though the company had originally estimated decommissioning costs at $8,000 per megawatt, several councilors stated on Monday they would not be comfortable with anything less than $30,000 per megawatt, amounting to nearly $1.2 million for the entire project.

“There is no record of, ‘How do we dispose of this?’ because we haven’t gotten to 20 years yet,” said Council President Paul Vadenais.

“After 2008, you can’t assure that any bond should ever last,” said Osier.

Osier also pushed for the town to hire an independent consultant to evaluate the decommissioning costs, a measure supported by Zwolenski. After more than an hour of discussion, argued Osier, councilors still had no idea of whether their cost estimates were correct.

“Just to be throwing arbitrary numbers at the wall at 10:20 at night is not, in my opinion, doing our best,” he said.

After Town Administrator Gary Ezovski said he would prefer a 50/50 cash/bond split, Vadenais amended his proposal to include $600,000 in cash and $600,000 in a decommissioning bond. The measure passed by a 3-2 vote, with Osier and Zwolenski voting against.

Board of Elections wants to move to Cranston. But a lawsuit says it’s part of a ‘sham’

With wind turbine decision under appeal, developer turns to solar on Pacheco property
Comments are closed.